In celebration of the power of gospel music to heal and bring communities together, the combined forces of the Washington Performing Arts Men, Women & Children of the Gospel Choirs will present “Renew,” a concert dedicated to rejuvenating the mind, body, and spirit, on June 2, 2017 at 8 p.m. at Strathmore.

On the program are the world premieres of two new Washington Performing Arts commissions: “DC Water,” by American folk and blues musician Toshi Reagon; and “Dwelling Place” by Stanley J. Thurston, Artistic Director of Washington Performing Arts’ Gospel Choirs. The balance of the program, spans works by some of gospel’s most prominent living composers and arrangers, including Richard Smallwood, Hezekiah Walker, and Kurt Carr, as well as works from outside the gospel repertoire by Richard Rodgers, Chuck Brown, and Marvin Gaye.

All together, the program perfectly encapsulates the Gospel Choirs’ 25-year legacy of providing hope and spiritual renewal, in venues from the Kennedy Center and Carnegie Hall to the TODAY Show and the White House.

The program, carefully curated by Thurston and Children of the Gospel Choir Music Director Michele Fowlin, highlights four elements—Mind, Earth, Body, and Spirit—each comprising musical selections that speak to the idea of healing and finding hope in difficult times. The host for the evening, Jacquie Gales Webb of WHUR-FM, will provide a thread linking each section together with a narrative penned by playwright and lyricist Murray Horwitz, a Tony-winner for the musical Ain’t Misbehavin’.

The 100+ singers of the Men & Women of the Gospel and Children of the Gospel Choirs—backed by an instrumental ensemble of piano, brass, strings, percussion, and more, led by Anthony Walker—will perform, both together and separately, gospel standards like “A Quiet Place” and “Matthew 28” (with choreography by Michele Fowlin and Megan Merchant).

Other less traditional, but no less fitting, works on the program include “What’s Goin’ On” and, in homage to the Choir’s D.C. roots, a Chuck Brown medley. Alumni from the Children of the Gospel Choir, many of whom have launched successful careers in music after their time in the program, will join for this joyous occasion, including Annisse Murrillo, who will perform the solo for “You’ll Never Walk Alone” from Carousel, and C. Anthony Bryant, a gospel musician currently based in New York City. 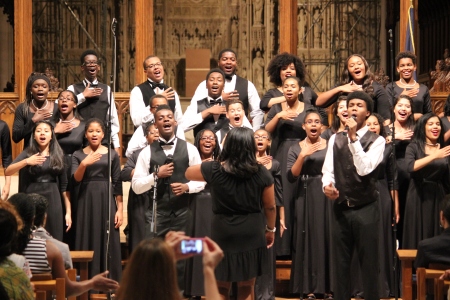 Following the performance, all patrons will be welcome to attend the “Linger Longer!” after-party, celebrating the choir’s Silver Jubilee and 50th Anniversary Season finale in the lobby with the artists and a cash bar.

June 2 will also mark the official release date for the Men, Women & Children of the Gospel Choirs’ debut CD, Why Do We Sing?, which will be available for sale after the concert. The disc features studio recordings of the title track by Gale Jones Murphy, “Amazing” by Stephanie Oplacio and Hezekiah Walker, the traditional “Ol’ Ship of Zion,” arranged by Stanley J. Thurston, and more.