T.C. Carson won many hearts when he played Kyle Barker on the hit comedy, “Living Single.” However, T.C. Carson is also a very skilled and gifted vocalist. Those gifts were on full display Monday, September 26 at the MetroStage in Alexandria, VA when Carson presented the jazz cabaret, “Love: Music.” It was an electic mix of songs that spoke the language of love. 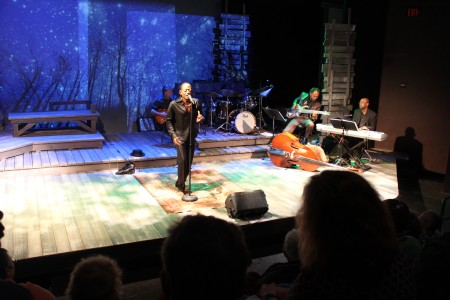 Accompanied by a quartet that included William Knowles on keyboard, Gregory Holloway on drums, David Cole on guitar and Yuself Chisolm on bass, Carson gave the crowd a healthy dose of love music. He peppered them with an array of classic hit songs that thrilled the audience, especially one group of ladies in the seats to his left.

Coupled with an ever-changing backdrop that personified each song, Carson was thoroughly engaging from singing an Al Jarreau song, to effortlessly delivering on “Round Midnight,” Carson made it a night all about love. He even served up “My Funny Valentine” which he memorably sung on Living Single.

The night was also filled with humor as Carson said he was going to sing a song that most fellas aren’t allowed to sing without getting in trouble. He then launched into a spirited version of Jasmine Sullivan’s “Bust Your Windows.” He also got great audience participation on “No Diggety.” 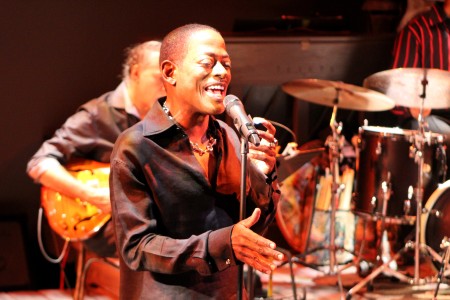 The TheatreMuse had an opportunity to speak with T.C. Carson briefly back stage. With his comedic timing still evident in his performance, the Theatre Muse wondered if Carson is still open to doing comedy.

In his third appearance at MetroStage, Carson is appearing in the play, Blackberry Daze. He shared a little about the plot:

“It’s a piece written by Ruth Watson that comes from her book, The Blackberry Daze of Summer and it was adapted from her book by Thomas Jones. William Knowles who played piano tonight, wrote all the music for it and it really takes place in 1920s rural America about this young girl and her family, her mother and the community. I play Herman Camm, kind of a never do well that comes in and marries her mom and kind of is not a very good person…and I’ll leave it at that.”

Carson’s most recent album is Live in Beverly Hills. He spoke of his plans for a new album: “We’re working on it now, so hopefully next year it will be out.” And don’t worry, Carson promises, that just like its show it will be a mixture of songs. Certainly an album worth the wait!

T.C. Carson will appear in Blackberry Daze through October 9 at MetroStage. Click here for ticket information. His jazz album Live In Beverly Hills as well as his one of a kind rendition of the jazz standard “My Funny Valentine” are both available now on iTunes, Amazon MP3 and Spotify.